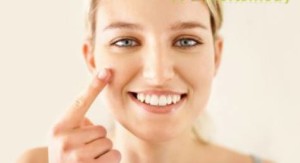 In the fall my eyesight was giving me problems, and it felt like it was degrading rapidly, probably from too much eyestrain on the computer.

I was getting to the point that I felt like I needed glasses just to eat dinner or chop vegetables, which is not normally the case for me.

I had read in the past that the health supplement curcumin is good for eyesight (medical journal references below), so I started taking 6 curcumin capsules a day (divided over 3 doses). At the rapid rate my vision seemed to be degrading, I knew I needed to be using the maximum recommended dosage.

Curcumin is also known by the name Turmeric, but to be precise, Curcumin, which has powerful antioxidant and anti-inflammatory properties, is actually the most active constituent of turmeric.. You may recognize the name from cooking – a member of the ginger family, this spice is often used in Indian cuisine. It is what gives the yellow color to Indian curry and American mustard. And while you might find it in ground form for cooking at the grocery store, its sold as a health supplement in capsule form.

Tumeric has a wide range of health benefits. According to Dr Andrew Weil:

I was using Life Extension BioCurcumin and I can attest that this brand of biocurcumin is definitely effective. For the record, I have absolutely no affiliation with the company or the product, and I am not compensated in any way whatsoever for mentioning their brand.  I’m just very happy with the results this brand delivered.

Biocurcumin is a superior and more bioavailable form of curcumin, so when looking at curcumin supplements, products labeled as biocurcumin are preferred over curcumin itself. To be clear, biocurcumin is not a brand name, it is a type of curcumin produced by various manufacturers.

I had previously found biocurcumin to be very effective for me in fighting off serious strep throat and cold symptoms (including when I was watching over my mom with my mom when she was in the hospital for 3 weeks, on a wing filled with patients with a super-bug), but when I took it last autumn it had a very rapid effect on improving my eyesight.

The constant blurred vision cleared up, and I no longer felt like I should be wearing glasses to see my food when eating dinner or chopping vegetables. My eye sight returned to how it had been before (simply need drugstore glasses for reading and the computer), and I suspect that if I had kept taking it at that dose, my eyesight may have improved well beyond that. Which is something I will probably still do. I only stopped because I ran out of the curcumin, and by that point there had been amazing improvement.  Some time later I switched to using Now Foods Bio Curcumin (simply because I happened to have it on hand) and really saw no ongoing improvement, but that I won’t blame on Now Foods. I will only know if the brand really made a difference in this case once I try the Life Extension Brand again and see if it results in ongoing improvements to my eyesight.

HOWEVER, there was one further effect I noticed, which I had not anticipated.  By the time the bottle of BioCurcumin ran out (keep in mind, it wasn’t even a full bottle when I began using it for this purpose – I was probably on it for only 2 – 3 weeks), I started noticing that the melasma (patches of darkened skin) on the top left side of my forehead appeared to have vanished. It had cleared up. For many years I had Melasma on both the upper right side and the upper left side of my forehead, which had been of equal darkness. Suddenly, the melasma on the right side was still there but the melasma on other side was gone, after being there for many years.

I immediately started thinking back on everything I had been taking. I had previously taken certain supplements specifically hoping to clear the melasma but saw no effect. But I wasn’t taking anything for the melasma at the time. The only thing I was taking that was anything unusual was the high does of Life Extension BioCurcumin. I did not know that curcumin had any effect on melasma, but since that was all that I had recently introduced to my regime, and at somewhat high doses, I went to search that online, and lo and behold!  Yes indeed, curcumin is documented for improving melasma. There you have it. Miraculous!

(I don’t mean to get overly dramatic, but keep in mind, I’d had that spot of melasma for 20 years, and I HATED it).

I had tried so many things over the years to get rid of the melasma, including doctors prescriptions, expensive drug store skin lightening creams, and a variety of other remedies that are recommended (including lemon juice and hydrogen peroxide). Nothing had ever made even the slightest improvement. And now, finally, at least some of my melasma was gone.

It was definitely the high daily doses (6 capsules per day) of curcumin, consistently, for an extended period (2-3 weeks)  which did it. And I will also say I think the Life Extension brand of biocurcumin was pivotal too. However I will be doing further testing with both Life Extension and Now Foods to compare effectiveness in the future. For now though, if I want to be assured of improvements on both counts, I will stay with Life Extension biocurcumin.

If you are dealing with either melasma or vision problems, you may want to give curcumin a try and see what it can do for you. When shopping for curcumin capsules, biocurcumin is the best type because it is more easily usable by the body. I’ve mentioned the brand that I was really impressed with, based on the dramatic results I experienced, but you’re free to try any brand. I do find that results with any supplement can vary from one brand to the next. And I also find that although a particular brand may be superior for a particular supplement, it is not necessarily the best choice for all supplements, so if you try a particular brand and don’t get results, you sometimes need to try another brand before concluding the supplement doesn’t work for you.

Its now been about 8 months since I achieved the results I described, and there has been no backtracking. The melasma on the left side of my forehead remains gone, and my eyesight is holding steady. At some point I will resume taking biocurcumin with hopes of getting rid of the melasma on the other side of my forehead, and improving my vision further, hopefully to the point that I no longer need drugstore glasses for reading. At this time, I need to take a pretty wide variety of supplements for other conditions so the timing isn’t right to add yet another.

If you’re going to give curcumin a try, remember that consistency is important. You need to take it every day, and you should take two capsules, three times a day. How long before you see results? This varies a lot from one person to another, as with any supplement. But the general recommendation is to allow up to 90 days before results are seen. In my case, however, it was much faster, just a couple of weeks.

“I frequently recommend turmeric supplements, and I believe whole turmeric is more effective than isolated curcumin for inflammatory disorders, including arthritis, tendonitis, and autoimmune conditions. Take 400 to 600 milligrams of turmeric extracts (available in tablets or capsules) three times per day or as directed on the product label. Look for products standardized for 95% curcuminoids”.

Dr.Weil says that curcumin or tumeric should be taken with black pepper or piperine (bioperine), which is a constitute of black pepper because on its own it isn’t well absorbed. I didn’t find that to be the case – as I mentioned, the biocurcumin I used was clearly effective in significantly improving both my vision and melasma. But bioperine supplements are easy enough to find at your favorite supplement store or health food shop, and not particularly expensive. If taking bioperine to increase the effectiveness of curcumin, the two should be taken at the same time.

As I suggested earlier, Dr. Weil also advises to be patient when taking turmeric supplements, because, he says, the full benefits may not be apparent for eight weeks.

Pregnant women and people with  gallstones or bile duct dysfunction should not take tumeric or curcumin. approval. In rare cases, extended use may cause stomach upset or heartburn. There is some evidence to suggest that curcumin can interfere with a chemotherapy agent used to treat breast cancer, so if you’re treatment for breast cancer, be sure to discuss the advisability of taking curcumin with your physician.