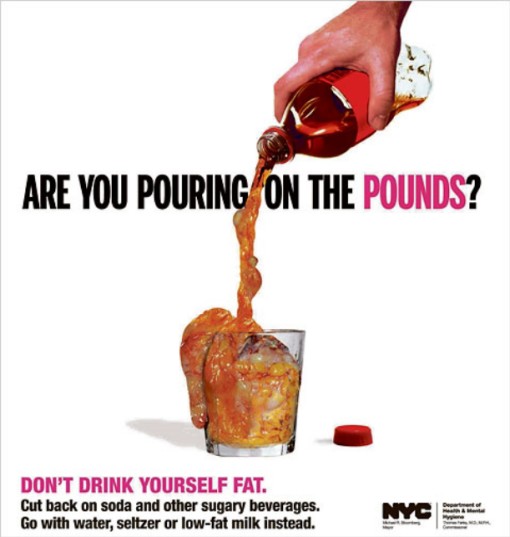 A UCLA study showed that people who drank one sugary drink such as a soda every day have a 27 percent higher likelihood of being classified as overweight or obese than those who don’t drink sugary beverages (actually, fruit juice counts as a sugary drink as well – about as bad for your figure as drinking pop).

Drinking just one soft drink each day adds up to a total of 39 pounds of sugar each year.

If you drink an average of 1 can or glass or soft drinks a day – you’re consuming 150 calories of soda every day.  So not drinking soft drinks will save you 1,050 calories per week.

Over a year’s time, that’s the equivalent of more than 15 pounds of fat. And that’s just from cutting out soft drinks – it doesn’t include any weight you’d lose from other lifestyle changes such as getting more exercise or any other changes to your eating habits.

You can cut your risk of cancer and lose weight simply by cutting soft drinks out of your diet.

Need that little bit of fizz?  Try carbonated spring water – add a squeeze of lemon juice for flavor and a citrus zing. Crisp and clean – with no carcinogens!

I will admit I’ve been a lifelong Pepsi addict. Couldn’t get through the day without my Pepsi (I don’t drink coffee). Tried Diet Pepsi several times, but it didn’t taste at all like Pepsi, so it wasn’t for me.

Slowly over the years I’ve cut down. For the last couple years I’ve been down to one Pepsi per day. But after hearing that Pepsi contains an ingredient which could cause cancer, I cut out Pepsi cold turkey and have stayed off the stuff.  There was a time I couldn’t have imagined getting through the day without my Pepsi. But honestly, after you;ve been off a sugary drink like that for even just a little while, you actually lose your taste for it.  Recently I was at a dinner, and the only beverage option was Pepsi, so I made an exception. It didn’t taste good to me at all.  It was amazing at how my taste for it had totally changed. I don’t miss it and I won’t go back.  After having it that one time recently, I;m more sure of that than ever.  It really kind of tasted yuck. And I used to crave the stuff all day long!

So give it a try. The first day or two might be tough, but not long after, once your body adjusts to taking in less sugar, you won’t miss soft drinks at all. In fact, like me, you’ll wonder what you ever saw in the stuff.