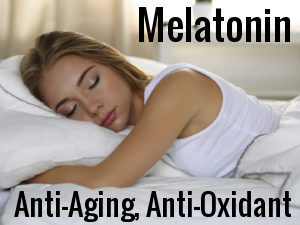 Not Just for Better Sleep….

Melatonin is most well known as a natural sleep aid, but one of the best kept secrets of melatonin is its powerful anti-aging and antioxidant benefits. In fact, according to researchers and natural health experts, melatonin is one of the most important supplements you can take to slow aging or reverse the aging process, and to prevent disease due to its antioxidant properties. Melatonin also has anti-inflammatory properties and enhances the immune system.

First discovered by scientists only about 50 years ago, melatonin has been known as “the sleep hormone” for years and recommended for improving sleeping quality  because of its role in regulating our internal body clock.  But what most people still aren’t aware of is that the health-promoting benefits of melatonin are much greater than that. In recent years, based on extensive research, scientists have discovered melatonin has also beneficial effects on everything from heart disease and diabetes, to bone health and obesity.

According to Life Extension Magazine, natural melatonin production in the body slows down as we get older, and that decline contributes to the aging process and general decline in good health as we age.  Its not hard to understand then, how taking a daily melatonin supplement is important in slowing the effects of aging and maintaining good health, especially for everyone age 30 or older.

Emerging science now suggests that Melatonin may protect our genetic material and guard against age related disease and decline.  Preclinical studies have found that melatonin increased the life span of animals by up to 20%—prolonging their youthful character in the process.

Recent advancements in melatonin research have produced scientific evidence demonstrating how melatonin is able to play such a major role in the combating aging process.

In recent years, extensive scientific research has revealed melatonin’s vital role in the body’s defense against numerous cell-damaging free radicals. According to Life Extension Magazine,  Melatonin has been found to possess 200% more antioxidant power than vitamin E and to be superior to glutathione (previously thought to be the most powerful antioxidant known),  as well as superior to vitamins C and E in reducing oxidative damage.

As such a potent antioxidant, melatonin plays a powerful role in fighting free-radical-related diseases—from cardiovascular disease to cancer – and everything in between.

In post-menopausal women, melatonin has been found to inhibit lipid peroxidation (damage to your fat cells caused by free radicals), thus leading to decreased levels of low-density lipoprotein (LDL) cholesterol, one of the primary ingredients for the formation of atherosclerosis. A more recent study on men confirmed these findings, suggesting that melatonin leads to overall lower levels of oxidative stress in humans.

In the past decade, much research has been done confirming melatonin’srole as a cardioprotective nutrient. Animal studies have demonstrated melatonin’s antioxidant protection against heart muscle injury, its ability to reduce the damage done by a heart attack, and for improving the strength of the heart’s pumping action following a heart attack. Since cardiovascular disease is the leading cause of death in the United States, melatonin’s ability to protect against heart damage is significant.

Recent research suggests that melatonin has anticarcinogenic properties—on otherwords, melatonin helps prevent cancer from occurring, and can cause cancer cell death if it does occur. This is die to melatonin’s antioxidant, anti-inflammatory, anti-proliferative, and hormone-regulating properties.

Melatonin’s ability to interfere with cancer cell multiplication and growth (“proliferation”), as well as inducing cancer cell death (“apoptosis”), has been documented in cancer patients.

Melatonin has been shown to successfully slow the progression of cancer and/or decreasing treatment side effects used in individuals with advanced stage cancers undergoing conventional anticancer therapy.  As reported in Life Extension Magazine, in randomized, controlled clinical trials evaluating the benefits of melatonin as an adjuvant therapy for cancer patients with solid tumors undergoing chemotherapy or radiation therapy, researchers found that concurrent use of 20 mg of melatonin once daily versus conventional treatment alone, improved the rate of complete or partial remission by nearly 50%, increased the one-year survival rate by 45%, and decreased the devastating side effects of conventional therapy such as low platelet count, neuropathy, and fatigue by 89%, 83%, and 65% respectively. These effects were consistent across different types of cancer and there were no adverse events reported.

Melatonin’s anticarcinogenic properties can also be attributed to its effect on the immune system. Laboratory studies show  that melatonin can activate T-helper cells, which triggers other immune cells in order to help kill off foreign invaders or pathogens. Melatonin facilitates healthy cell-to-cell communication, which enhances the body’s appropriate immune system response to foreign invaders.Based on available evidence, leading experts suggest that patients with cancers and particularly metastatic solid tumors, might benefit from melatonin use, potentially leading to improved therapeutic outcomes.

Melatonin Dosage and Side Effects

Melatonin typically has few side effects when used at the appropriate dosage.

In 2001, researchers at MIT concluded that the correct dosage for melatonin falls between .3 and 1 mg. However, its frequently sold at higher dosages in the supplement aisle at the pharmacy.

Critics caution that its easy to take too much, and most of melatonin’s side effects are the result of just that. While there’s no evidence that too much melatonin could be even remotely life-threatening, exceeding the proper dosage can upset the body’s natural processes and rhythms, critics say.

There are many hormones that can be dangerous when taken in doses too high; however, with melatonin its not dangerous according to medical experts, but it can make you very comfortable. As one doctor said, overdosing on melatonin won’t kill you, but it’ll make your life pretty miserable.

According to Michael Grandner, a sleep researcher at the University of Pennsylvania, melatonin can cause a bit of a hangover effect, despite the fact that its widely purported not to leave you feeling drowsy the next morning.  He reminds us, melatonin is a hormone and that if regularly used in children,  it can potentially affect puberty, disrupt menstrual cycles and impede normal hormonal development.  This is noteworthy since scientific studies suggest melatonin can help prevent sleep disorders in children suffering from ADHD and autism (though its use in kids remains controversial).

Excess melatonin can also induce hypothermia, as body temperatures reduce during melatonin release, and stimulate overproduction of the hormone prolactin, which can cause hormonal problems and even kidney and liver issues in men – but this would only occur at very, very high doses .

When used occasionally and at the correct time, melatonin is a fine means of encouraging sleep. But, some doctors claim that, ironically, with prolonged use, it can actually make sleeping problems worse. Having too much melatonin in the system, the theory goes, overwhelms the receptors, changing how a patient reacts it.

According to one doctor, melatonin supplements may work at first, but soon “you’ll stop responding because you desensitize the brain”. And as a consequence, he says, not only will your body stop responding to melatonin taken in supplement form, the natural melatonin your body produces will also become less effective, leading to increased insomnia after  prolonged use

Mauricio Farez, an Argentinian sleep researcher, has similar reservations. “I have some issues, in terms of the pharmacology, and…it’s really hard to have stable levels of the drug in our blood.”  However, he is quick to acknowledge that this doesn’t mean melatonin is without potential benefits. Farez wants to see more research on its immunologic potential, as his most recent study suggests melatonin could play a role in managing multiple sclerosis. He also acknowledges that it is  widely used to fight certain types of cancer, as it combats tumor cells.

Grandner states that “Taking melatonin for an extended period of time your body may acclimate and re-adjust and produce less over time which will work against you.”

I personally use melatonin, and I am one of the millions of people who report that there is a “night and day” difference in my sleep quality when I take it.  The fact that Dr Wurtman says this is not possible does cause me to question the accuracy of the other statements he has made, because I am going on personal experience which clearly negates what he has said. If he is wrong about one thing (which I know from experience is so, and which many other melatonin uses will attest to), then obviously it leads me to wonder if I should be taking the rest of what he says at face value.

Even these critics agree that melatonin has its benefits. Farez, as noted above, cites its immunologic potential and role in managing multiple sclerosis as well as combatting cancer tumor cells.

Both Farez and Wurtman believe melatonin’s potential benefits outweigh the drawbacks, but say that’s largely in a clinical, controlled environment under professional supervision.

I will also point out that the critical comments made of melatonin were reported in a Huffington Post article which made a statement which was blatantly incorrect. Therefore, again, this poses credibility concerns about how well the facts were reported in the rest of that article. The article stated that the US is the only country in the world where melatonin is sold over the counter without a perscription, which is entirely false. I am located in Canada, where melatonin is freely available over the counter (including at the time the article was published – last month, in December 2017), without a prescription, and has been for years.

Inexpensive, easily accessible, naturally occurring and considered safe, melatonin appeals to the those who’d rather avoid prescribed plls or over the counter sleeping pills.  According to the National Center for Complementary and Integrative Health, in a survey in February, 2015, nearly 1.3 million American adults reported taking melatonin just that month.

Where to Buy Melatonin

I buy all my supplements at iHerb.com – they offer some of the best prices I have found and offer a very broad selection (and shipping is super-cheap!).

« How to Clean a Kitchen
Cancer Causing Chemicals in Laundry Detergent »
Share!