Creeping Charlie is difficult to kill, but you can control it with a conistent, vigilent approach.  Bob Vila offers this tip for increasing the success of your war on Charlie:  spray the weeds either before or right after the first frost. Frost weakens the plant making it more vulnerable to the weed killer. The leaves will store the  herbicide over the winter and it will continue to act in the spring when the plant would normally be growing robustly.

Do not mow for at least two days after spraying, so that the chemicals can be absorbed down into the roots of the plant.

Control regrowth of Creeping Charlie long term by preventing it from growing in the first place. A thick, healthy lawn of turf grass is inhospitable to weeds—there’s simply no room for them. Maintaining your lawn’s overall health will ensure Creeping Charlie, and other pesky weeds, can’t get a foothold.

You can make your own selective weed killer using Borax  and it is very effective for even difficult to kill weeds such as Creeping Charlie (also known as creeping Jenny) in your lawn, without killing your grass.  HOWEVER, care must still be exercised when using it. If excessive quantities are used, Borax can damage and even destroy lawns. This is not being suggested as a general all around remedy for weeds.  If you have recently used other weed killers in the same area, you should also use caution when applying Borax – it is the boron in Borax that works to kill the weeds; boran is one of the active ingredients in commercial weed control products. So when you apply Borax you will be adding to the level of boron in the grass that is already there from other recently applied products.  The right amount of boron wont harm your grass – too much can.

Borax home made weed killer is effective against Creeping Charlie but can be damaging to other plants, so take care using it.  It does work wonders on weeds in cracks in walkways, though, since it will not hurt surrounding plants.

Borax is actually sodium tetraborate, which contains Boron, a white, crystalline, mineral salt. All plants need a certain amount of boron to survive, but this varies from plant to plant.

As early as the 1920s, this mineral salt was being used for its natural cleaning properties and gardeners learned that it was able to eradicate weeds. When borax powder is used on weeds, it will exceed the amount that the plant needs to a toxic level and will thus kill the weed.

How well it works, and how toxic the weed killer is depends on how much boron is already in your soil.  Soil testing will give you this information and much more.  Borax is not harmful to people, but since most plants cannot tolerate too much of it, using it on weeds in a vegetable garden is not recommended.

Borax is not only great as a weed killer for creeping Charlie. it can be quite effective at controlling ants. Borax can also be used to preserve flowers when combined with corn meal with great results.  As an aside, you can also make need Borax crystals and “slime” that kids like to play with using Borax – do a Google search to learn more.

There are lots of retail weed killers which claim  to control Creeping Charlie, but if you are looking for a more natural weed killer, this one is known to be effective.

The formulation further below is from the University of Iowa’s website., for doing a large area of 1000 sq ft.  A smaller formulation is as follows –  Add 10 ounces of powdered borax to 2.5 gallons of water, mix thoroughly, and use a sprayer to coat the leaves of unwanted weeds in your yard. Keep overspray off of any plants you want to keep, avoid saturating the soil with the solution, and avoid contact with bare skin.

U of Iowa advises taking care to use the proper formulation to avoid adding excessive amounts of Borax to your lawns.

This formula will treat 1,000 sq. feet: (Don’t use it on a smaller area, or it will be too strong.) For use on established lawns.

Conversion for Metric Measurements and An Alternative Production Method

The published formula produces 2.5 gallons of weed killer from 10oz Borax (with an intermediate step to dissolve the Borax in a lesser quantity of water and then dilute into the 2.5 gallons). As indicated, the formula is linearly scalable (i.e. use 5oz Borax to produce 1.25 gallons of water), however, I found the Borax does not dissolve very well at all, let alone in a small quantity of water.

Since 5oz Borax will produce 1.25 US gal weed killer, and 1.25 US gal equals 4.73L, we can do the following to produce 4.75L of weed killer in a 5L Jug (a commonly available container size, from bleach or pool chlorine for example):

I use a clear plastic 1.89L container to pre-mix the 5oz/1.25USgal Borax solution.

To simplify the process, I pre-marked the container (using a felt marker on the outside) with lines indicating 250ml and 1.5L.

I fill the container with 1.5L hot water (to better dissolve the Borax) and pour the 5oz Borax into it; shake vigorously; then pour the “solution” (all the Borax will likely not be dissolved, there will probably be leftover Borax powder in the container”) into the 5L jug.

Refill the container with 1.5L hot water, shake vigorously, and pour into the 5L jug – this time, there shouldn’t be any Borax left in the container, or if there is, only very little.

Refill the container again with 1.5L water and pour it into the 5L jug.

Finally, fill the container only to the 250ml mark and pour that into the jug.

The markings on the container made it easy to measure accurately, and the multiple fills into the container “rinsed it out” as you went along.

TIP:  If you have trouble mixing the Borax, some people recommend mixing in a blender for 30 seconds and it does a good job. An old blender would be better than one you use for food preparation.

For uniform application on weeds, pour the Borax weed killer into a spray bottle and evenly apply the mixture over the area to be treated. A spray bottle that holds about 3 cups of the mixture will treat 62 square feet.

Remember that creeping Jenny spreads by underground runners, so it’s a good idea to treat a slightly wider area than the one where you find the weed.

For smaller areas, cut the amounts down but keep the percentages the same.  i.e.  For 500 feet, use 5 oz of Borax in 2 oz of warm water and dilute with 1.25 gallons of water.

For best results, apply the Borax weed killer when the creeping Charlie weed is actively growing in the fall. Choose a day when no rain expected for at least 48 hours. Then repeat two weeks later.

How to Get Rid of Creeping Charlie

The best way to get rid of Creeping Charlie and to control it is to kill it at the roots with your locally available non-selective vegetation control. Home remedies such as vinegar won’t do much to the roots, but will control top growth. The problem with creeping charlie (and wild violet) is that it is very difficult to control and will grow back right through a seeding job or sod, until it is killed off completely – which can be hard to accomplish.

The more realistic aim with Creeping Charlie is to control it, as opposed to killing it, due to the tenacity of the weed.  Not all weeds are controlled even with a powerful weed killer like Fiesta® (creeping Charlie and violet for example are NOT) –  they will require several applications every year to “manage” it- the idea is it keep it in a weakened state so that turf grass has a fighting chance against it, in order to try and crowd them out.

The minute you see new growth or new plants creeping in, blast it again with your weed killer, to ensure it doesnt gain a strong hold. 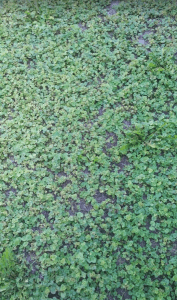 Creeping Charlie can be identified by its round to reniform (kidney or fan shaped), crenate (with round toothed edges) opposed leaves 2–3 cm (0.79–1.18 in) diameter, on 3–6 cm (1.2–2.4 in)long petioles attached to square stems which root at the nodes. Like crabgrass, creeping charlie’s root has a ball. It is a variable species, its size being influenced by environmental conditions, from 5–50 cm (2.0–19.7 in) tall.

How to Kill Creeping Charlie Without Killing Grass

One of the most important factors is proper mowing and regular watering. It’s important to remember that Creeping Charlie:

Fiesta is somewhat effective at managing creeping weeds like creeping charlie, however it takes multiple applications over several visits (and performed annually), to see measurable results and will not be effective without proper mowing and watering practices. It is best to apply Fiesta as a fine mist to better cover Creeping Charlie’s overlapping leaves. You will need a min. 3-4 Fiesta treatments to see results. (but not eradication)

An effective application will result in discoloration and “tattering” of the leaf edges within about a week.  Re-growth is expected.  This weed spreads using “runners” at or just beneath the soil’s surface (which cannot be sprayed). Runners retain energy and stimulate new growth in thin areas throughout the lawn.  For this reason seeding of thin/bare areas is essential in preventing the spread of Creeping Charlie.  A lime soil conditioner application may help reduce creeping Charlie where there is a pH problem present.

Creeping Charlie is a perennial, evergreen weed in the mint family. A native of Europe, it spreads by seeds and rhizomes. It prefers moist, shady areas, but can tolerate sun.